A look back at Irish chess history!

This is the first installment of a series of articles on Cork's first international chess tournament. This is a work in progress as I am still researching so I begin with a brief introduction. 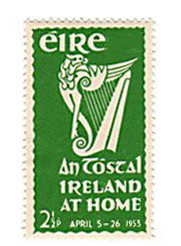 An Tostal 1955 Chess Congress was the first International tournament held in Cork. It was run as part of An Tostal celebrations which were inaugurated in 1953. The original purpose of An Tostal festival was a celebration of Irish culture, with the dual purpose of drawing tourists into the country during the Easter off-season. It was marked by a series of regional parades, arts and sporting events. Many towns began a clean-up plan thus began the National Tidy Town Awards.
Chess Competitions were held as part of An Tostal by the Irish Chess Union from 1954 to 1957. The 1957 event was one of the greatest Chess events ever held in Ireland and more will be written on that subject at a later date.

The 1955 event was organized by Enda Rohan and controlled by J.B. Olden. It was run from Thursday 12th May through to Thursday 19th May. Play was held in the C.Y.M.S. Little Theatre, Castle Street, Cork. Play began at 6.30 p.m each day with any adjournment played the following day at 2.30 p.m.

There ends the first installment, plenty of more ahead! I hope it has inspired interest.
Posted by Tony at 12:43 PM No comments: